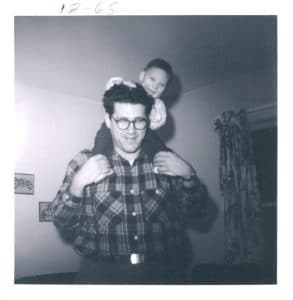 The last thing my father in law would want right now is us feeling sorry for ourselves. He’d tell you what he told me last month: At 81, he wasn’t in any hurry to go, but nobody lives forever, and he had a good life. Besides, there’s not a darn thing you can do about it.

OK, he wouldn’t have said darn.

If you had to pick one word to describe Nick, it would be solid. I’ve never met a man who was so secure in what he was and what he was not. He was a dad. He was a husband. He was both a Catholic and a champion of guys who worked hard for a living.

When I first started dating Lisa, I briefly questioned what kind of a father he was. After all, the guy was almost never home. It didn’t long to figure out that was because he and his wife were working their tails off to support six kids.

While Karen was watering down the Lucky Charms with Cheerios (true story), Nick was driving a school bus or picking up an extra shift or two at the plant to score some overtime. Yet in all those important years, this sleep-deprived dad never seemed to miss the important stuff:  Mass and spaghetti dinners on the weekends and the kid’s school stuff during the week.

And when he had a little free time, Nick stayed busy. Long before he was my father-in-law, he was the bonus dad who showed me how to change my oil, swap out brake pads or do a tune up.  Need to replace a toilet? Nick was glad to supervise!

When you started a job with Nick, you knew it was going to get done and get done his way because there was no other option. He didn’t believe in quitting or quitters. He expected everyone around him to be accountable in what I can only describe as his own gruff, very Buffalo Italian American sort of way. But when you needed help, there was no bigger teddy bear: He had your back because family came first.

I wasn’t sure what to expect when Jay started dating Sabrina. Honestly, I should have known better. Where other Dads of his generation might have freaked out about skin color, Nick saw only potential: Both in terms of the man and husband Jay would become — and for an immediate extra pair of hands to keep all the family’s various cars running.

As the years went by, Nick was always more comfortable behind the camera than in front of it. Pictures of the kids and then grandkids were what he prized most. Even JJ, our camera-shy teenager, knew there was no avoiding it.

One of the great joys of my life – besides stealing his tux pants at each of the kid’s weddings ­– was getting to watch Nick and Karen slow down and enjoy both retired life and each other.

I really worried they might work themselves into early graves. Instead, Nick boasted they had been plotting all along to spend our inheritance on trips to the Dominican Republic, Florida and other exotic locales.  (Sorry Nick, I am not including your old stopping grounds of Tonawanda or Buffalo on that list.)

And I wasn’t shocked in the least when Nick and Karen forked out big bucks to take a small army of family to the beaches of Negril, Jamaica.

But, sorry Karen, I still say it would have been cheaper to just charter our own family jet.

Over 40 years, I always marveled at how Nick and Karen made things work. He had a deep Catholic faith. Karen was just as committed as a Jehovah’s Witness. That probably would have been rough on lesser couples, but they always handled it with unbelievable grace and respect – they made it work because family came first.

Through the years, the Curtos dealt with all the usual family drama — and some things no family should have to go through: Divorces, illnesses, the time Brenda was shot, the loss of his parents, brother and other loved ones.

If you get to play catch in heaven, Nick is there now with a super slobbery tennis ball, a gimp-free Zeke and Teddy at his side. Cindy, the cat who was a dude, is still a little miffed about the pricey surgery Nick didn’t pay for. Pseudo, the only Curto pet to ever draw my blood on multiple occasions, is nowhere to be found. J

Twenty or so years ago, Nick gave us a scare with bypass surgery. Was it a quadruple or quintuple or something scarier than that?

We never really knew because Nick was back on his feet in a day or so, putting himself through hell and wearing out at least two Nordic Tracks, the pool at the YMCA and then stretching himself out with the weird turn-you-upside-down contraption they sell on late night TV … pretty much doing everything in his power to be around for the family.

In all the tough moments, you always knew Nick felt the weight of what was going on, but I never once saw any of them really rattle him. The glass was always half full, preferably with something he’d picked up back home at Johnson Estates or, on special occasions, from a guy named Jack Daniels.

Nick’s legacy is probably best told with a story about the night he died. Samantha and Nick told everyone we’d lost him, and that Karen was in pretty bad shape in the emergency room. The Nebraska kids – and grandkids – rushed to a waiting room at UNMC.

If ever there was a day to go into full basket-case mode, this was it. Instead everyone began tracking down extended family and hashing together details about what had transpired. The family stayed together. In very short time, everyone was telling stories and enjoying each other’s company while we waited for news about things that were outside of our control.

For folks from families whose screws are wound differently, the situation was surreal: Here are Nick’s kids confirming his status as an organ donor with the coroner, while an MRI is showing Karen’s 10 broken ribs and fractured neck.

Yet all the while, laughs are being had and everyone is dealing with the news in a steady, family-comes-together sort of way.

I am guessing our hospital chaplain has had much rougher nights.

OK, time to wrap this up. Nick would tell you our little remembrance has gone on much longer than it should. If I let it go any longer, he’ll probably kick my ass.

He’d say it’s time to gather at the house for some salad and brats. Yes, Nick, we know the spicy ones have the toothpicks in them.

I am pretty sure he’d be fine if the adults sent him off with a toast of his favorite sipping tequila.

But I am even surer he would want someone to take photos of his kids and the grandkids.

Because in the end, there really is nothing more important than family.